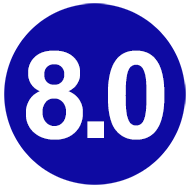 Overall, Superchargers sets out to bring vehicles into the franchise and succeeds on almost every level.  A visual stunner that’s sure to be a fun family experience.  While the game lacks the controls of a modern day beat-em-up, it makes up for it with it’s amazing level design, outrageous characters and attention to details.  A few of the mini-games are even for a kid laughably simple and are there to pad out a game that constantly reminds you that you’re missing necessary toys.  If you’ve got the moolah, your kids will surely thank you for picking this up.  If you’re someone who stretches their budget, you may find more enjoyment in other places; like previous installments.

WHAT WE LIKED
º Beautiful maps and cutscenes, that really stream together nicely.
º A large roster, including previous characters, all who feel different.
º Vehicles is a pleasant addition, and racing three terrains is fun.
WHAT WE DISLIKED
º The initial investment is a lot for those who want the full experience.
º Some mini-games are very weak and are there to pad out the game.
º Combat, on foot or seated in a vehicle, boils down to button mashing.
Disclosure:  Trevor Anderson was invited in August to Vicarious Vision’s studio, to check out their operations and game.  The trip was paid for by Activision, and the tour was guided.  They provided social events outside of the studio with the developers.  I played the game during this tour as well.  I was given a trophy for winning a racing tournament, a hard copy version of their comic series with a personalized doodle, and a lunch bag filled with local snacks.  The game was provided to MouseNJoypad at no cost, along with nine characters and eight vehicles for review purposes.

Before this entry, I only knew of Skylanders in passing.  A game where users can buy new toys and transport them into a bright and colorful world.  I understood the undeniable charm of the series and the alluring nature of returning sales.  When I went to the studio and met with the developers, it seems they’re truly having their cake and eating it too.  They get to create an engaging and enjoyable experience for the young at heart while making the financiers happy as hogs.

So, I decided this would be a great opportunity to sit down with my family, and take some time exploring the mystical world the team has laid out.  As a form of family enjoyment, this game shouldn’t let you down, and even if you’re a hardened gamer, there’s some stuff in here you may find enjoyable.
The story line is simple enough for a child to follow, and tongue-in-cheek enough for parents to get a few chuckles.  You play the “Portal Master”, responsible for bringing toys into the magical environment.  The floating world of The Skylands is in great turmoil once again, threatened by an evil portal master who has gripped the land in fear.  The comically inept Kaos is the man behind this evil, trying to prevent you from returning to save the enslaved citizens from his clutches.  Your group of ragtag allies are there to assist you, as you and your friends attempt to save Skylands Academy and the whole world.

Kaos starts the game by locking you out from the Skylands, but your group finds a way of getting you back in.  They have an assortment of vehicles that they can use to drive you back, due to some special engine of some kind.  Of course, this is shoehorned in, just to get the vehicles into the game.

Expanding the toy box past characters is a welcome departure.  It sets the series apart from Amiibos, Dimensions, and Infinity, possibly giving them a huge advantage over their financial firepower.  If they fail to continue driving this course however, this entry could be seen as a niche entry, in an industry that’s booming without the apparent need for innovation.
Game play is similar to other entries in the long-running series.  Each character has their unique elemental-enhancements, attack patterns, and types.  Despite that, you move from one enemy to the next, button mashing them to death.  Some development in this realm would be great, considering your fan base considers ‘Jumping’ to be a move in the right direction, I’m sure a dodge button would blow their minds.
The rest of the game is a collect-a-thon, between vehicle and character upgrades, coins and experience in between.  While you can upgrade your characters’ move set, the choices are minute and ultimately very linear outside of one branch point per character.  While visually interesting, they come across very shallow in what counts; combat.  After a while, their move set will grate on your nerves, and you’ll be begging for a new toy to change up the repetition.
The vehicles are without a doubt a pleasant edition and do help break up the monotony of fighting.  Just like the characters, the vehicles also have their own personalities, with an almost organic feel to them.  When paired up with their intended operator, they jump into Supercharge mode, adding additional firepower and visual diversity to the craft.  Racing through the maps, you can also discover additional upgrades to your toys; flaming wheels with better grip, streamlined wings for your jet or different propellers for your sub.
There are however a few downsides.  Controls are pretty standard when on a linear course, but in open areas, the controls change to pointing in the direction of your target.  While this makes for better battles, when you jump from track to an arena it takes a moment to regain your bearings.  There’s also no weapon or strategic changes or upgrades, and besides altering a few stat points, the upgrades are mostly cosmetic.

The racing is surprisingly fluid, utilizing the best features of kart racers from the past.  Water-based courses get crazy when you’re jumping from being submerged to skimming the surface, as you dodge gunfire from opponents behind you.  Flying stages have floating platforms and projectiles for you to deal with as you soar through cloud cover.  Racing in cars might be the most generic but feels fairly close to classic kart racers.  When you win, it feels like a real victory of strategy and effective racing, and you rarely feel cheated by a last-minute loss.  It may not have the speed of Mario Kart, but it does hone in on the exceptional level design while throwing in its own strategies and surprises, reminding me of the spectacular Diddy Kong Racing.

Superchargers does feature three different selections of land, air, and water traversing; so pull out your wallet parents, because it’s another 30 bucks if you want to play the whole game.  That’s just in missions; that’s not including other locked off content like all of the race tracks.  You don’t need the additional vehicles to complete Skylanders: Superchargers, but the game points out only after 15 minutes that you’re missing out without them on your shelf.  Add in more characters, at 15 dollars a pop, and you’ll looking at a pretty large investment.  There will always be new characters and vehicles to purchase, but if you’re ready for the long run, having a game with 150 unique characters can be an interesting proposition.  The game does run commercials for character and vehicles when you pick up new in-game accessories for them, but you can skip these previews if you’re not interested.
Skystones is back as Overdrive, a new approach to their card game that’s very similar to Hearthstone.  While it’s a nice diversion, it’s not the most challenging or diverse mini-game but does provide a nice introduction to children to card-based strategy.  It’s fun, but not worth the investment.
There’s also locks you’ll come across called Livewires.  These puzzles are beyond lazy.  They place you as a little guy who has to roll between conveyor belts and bumpers, attempting to activate a switch, while collecting three optional lightning bolts.  There’s no real way to fail or penalty for messing up, and it’s a shallow attempt at adding more weight to the game play.
The visuals and cut scenes are fantastic, especially for a game geared towards children. Cloud animations have been drastically amped up, and puffy clouds float around the environment, really adding to the mystic of exploring a city in the sky.  The colors are bright and vivid, and the diversity of locations is enough to where the game doesn’t feel repetitive for very long.  One minute, you’ll be traversing an Asian-inspired village, and racing your car down the backside of a dragon, and then you’re off to a cloudy utopia with Greek influences.  The characters’ designs are beautiful in their simplicity but have a unique charm that screams ‘Skylander’.  Simply put, the art department deserves major commendations, because in a world with 150 characters, staying consistent in the visuals is a huge task.

The camera floats behind you, and while I agree that felt disappointing at first, the fixed camera supports the beautiful layout of the game’s design. Whenever the camera jerks around the edges of the frame, you can see that details become more barren, and the world becomes less impressive.  The camera is always facing a set angle, besides a few key arenas.  Like a Point and Click adventure, this techniques allows the developers to maximize their use of the frame, developing deep, amazingly visuals.  This stationary positioning also works better with young children, who may be turned off by camera rotation controls.

Every character is fully vocalized by an impressive cast of veterans, including Patrick Warburton and Richard Steven Horvitz.  While they’re fun portrayals, you’ve probably heard them before; with Warburton being a goof and Horvitz doing a verbatim version of Zim from Nickelodeon’s classic.  They do, however, work here- providing a goofy and memorable impression on the player.  The music is soft and playful, but can be pretty forgettable- not nearly as amazing as Trap Team’s soundtrack.  Sound effects match the overall visual quality, resulting in a very polished presentation.
Superchargers is a great investment if you have a family with kids, but I can’t imagine most gamers would enjoy throwing so much money into this experience.  If you do have kids, and you’ll looking to be the parent of the year, then this might be a good time to buy into this franchise.  The characters are fun, the environments are beautiful, and the content does provide a good bang for your buck.  I’m not sure how much better or worst it is than Infinity or the new Lego Dimensions, but I can say it does what it’s doing right.  If you pick it up, you shouldn’t have too much regret; until you go over the Toys-R-Us charges.
·      Publisher – Activision
·      Developer – Vicarious Visions
·      Genre – Toys To Life, Action, Adventure, Racing
·      Release Date – September 16, 2015
·      Version Reviewed – PC
·      PEGI Rating – N/A
·      Multiplayer – No