As far back as I can remember, I always wanted to be a gangster… In a game. Not in real life- that’d be just terrifying. But, if there were one thing that always came in a close second, it would be taking on an alien invasion. I know, I was a weird child. Well, I guess my dreams are finally coming true because a game that combines both of those fantasies is finally getting made! Get it – ‘made?’

In ‘Timothy VS The Aliens,’ you’ll step into the pointy shoes of the titular gangster who’s living in a black and white gangsta’s paradise. It all comes crashing down however when a bunch of multicolored aliens invade your family’s noir-inspired territory, and Timothy decides it’s time to grab his Tommy gun and make them an offer they can’t refuse. Unfortunately, these aliens aren’t going anywhere anytime soon; they’re looking for a meal, and they flew a pretty long distance for some good Italian. Your job is to clear out these stronzos and get Little Fish City back from these extra-terrestrial freaks.

The game is developed by Wild Sphere, a small team out of Spain with ten years and 11 games under their belt. Co-Founder Irene Guardiola says in a video on their Kickstarter page that they’ve “designed the timing to be similar to that of the Ocarina of Time.” She describes the environments as being “divided into open world areas, where there will be many items, secrets and secondary missions.” According to a press release, they’ve also taken heavy inspiration from classic 3D platformers such as Ratchet & Clank, saying that “people love playing platformers like the ones they played in the 90’s, but with a more adult subject matter.”

“We wanted to bring back many of the emotions and features of the classic video games we liked,” said Guardiola as box art for Metal Gear, Little Nemo: Dream Master and Grim Fandango fill the trailer’s frame. “The timing, the humor, the personality of the characters. Take the good things, with the graphics and gameplay of today.” 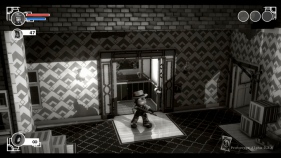 While there is a strong emphasis on platforming and collecting items, you’ll also need to hone in your blasting skills to take out the aliens with your massive arsenal. Weapons range from flamethrowers, grenade launchers, machine guns, slime guns and even a freeze cannon. You’ll also need to use your mysterious pack of playing cards to help defeat these interplanetary abominations. Gambit would be proud. You only have a stamina meter and a health bar to worry about, so if you get whacked, you’ll be sent back to a previous checkpoint. There are several different types of enemies as well, including huge lumbering blobs and packs of smaller, more speedy targets. The developers also promise to break up the action with puzzles to figure out between shoot-outs.

The Kickstarter page also includes a playable prototype, which is an open five-minute demo if you want to give it a shot before throwing down some bread. Their goal is just shy of $150,000 for a full release on PC, Xbox One and PS4. The game’s stretch goals include additional quests, new bosses, translations to other languages, multiplayer mode, and expansions where Timothy takes on “killer robots” and “mutant creatures.”

‘Timothy VS The Aliens’ is also running a Steam Greenlight campaign, and the developers are looking for you to make your voices heard by voting for them. Don’t keep them waiting- you might end up sleeping with the fishes. You can pre-order the game through the Kickstarter page for 17 dollars until July 30th when their campaign ends.